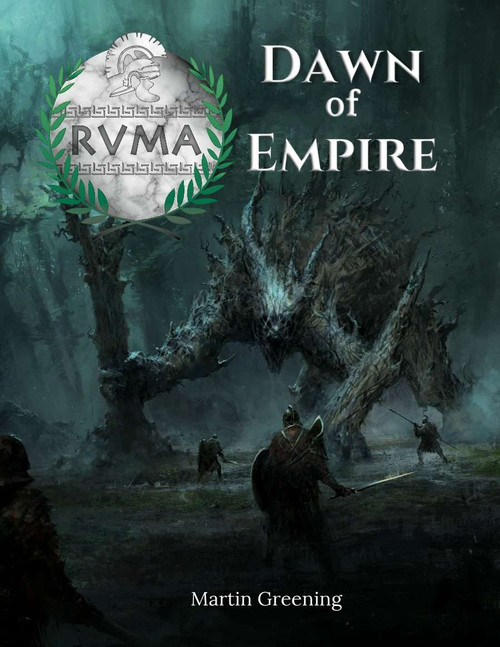 Citizen! The burgeoning Ruman Empire needs your help bringing civilization to the savages.
Ruma: Dawn of Empire is a tabletop roleplaying game set in an alternate Roman Empire where myth and magic are real. The Empire has just begun to push its borders into neighboring lands, only to be met by savage barbarians, murderous beasts, magical forests, and strange horrors. Ruman generals and senators have formed small cohorts of specialized troops to discover and counter these threats. You and your friends are members of such a cohort.

The game is powered by the Apocalypse Engine, created by D. Vincent Baker & Meguey Baker for their game Apocalypse World. The engine also runs many other awesome games, such as Dungeon World by Sage LaTorra and Adam Koebel, The City of Judas by Davide Pignedoli, and Legacy: Life Among the Ruins by James Iles. Ruma: Dawn of Empire owes a great deal to these games, and many others.

Inspiration for Ruma can be found in movies such as 300, Ben Hur, Centurion, Clash of the Titans, The Eagle, Gladiator, and Immortals; TV shows like Rome and Spartacus; and novel series like The Oath of Empire by Thomas Harlan and The Videssos Cycle by Harry Turtledove.

The Princess Bride: RPG (Sold Out)

Spell: The RPG (Sold Out)