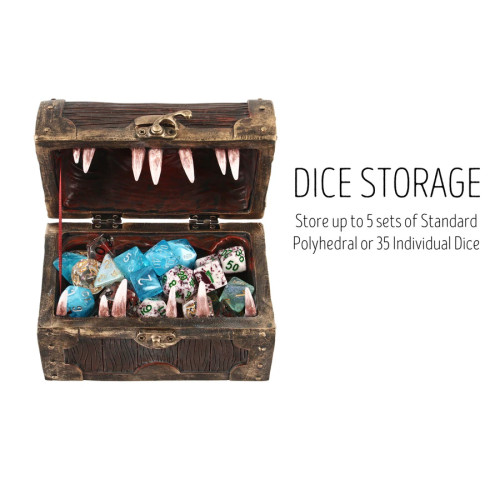 Forged Dice Co. is committed to one thing. Making really, really cool products. Their Mimic Chest box has enough room for 5 sets of polyhedral dice. Don't just show up with a boring bag of devouring or plain old dice bag! Set this inconspicuous treasure chest on the table and stun your gaming friends when they open to reveal the vicious teeth of a MIMIC! Weighing in at 1 pound 8 ounces and made of polyresin this treasure check dice vault is no cheap trinket holder. Hand crafted and hand painted each mimic box is unique and detailed right down to the rivets and teeth. When closed, there is no sign of anything out of the ordinary but when opened the mimic's teeth and bounty are revealed. Dare to remove the precious bounty captured by the Forged Dice Co. Mimic Chest!