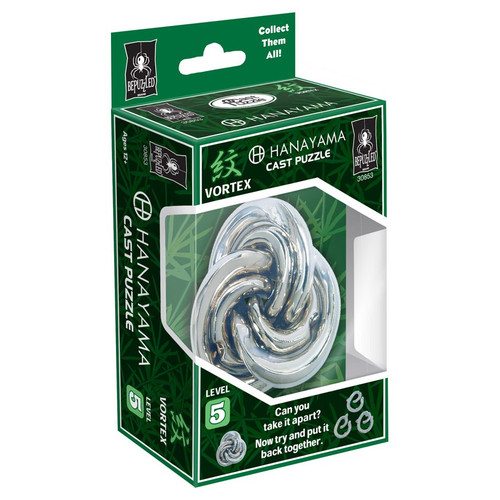 "The three pieces each have a spiral (vortex) body and two protrusions. When assembled together, each piece is unified into a flat object. In order to undo this complex entanglement it will be necessary to unbind them three dimensionally. The motivation behind this idea is the statue of Asura. Asura is an ancient Indian god and also a protector of Buddhism. The figure with the three faces and six arms conjured up the concept of Trinity. The subject is 'crest'."

Hanayama is known worldwide for challenging puzzles and quality manufacturing. Can you take the pieces apart, then put them back together again? Hanayama cast metal brain teasers have 6 levels of difficulty, and each puzzle is Mensa-rated. Level 5 puzzles are considered difficult by most puzzlers.