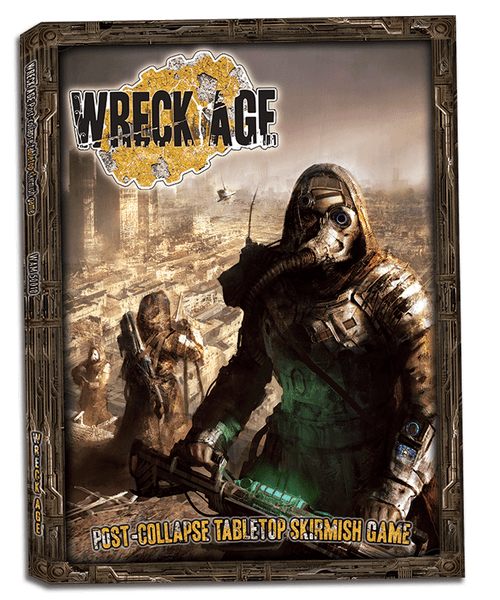 Two hundred years ago, the worlds’ rich and powerful left the planet in a mass Exodus. However, this grand plan didn’t include everyone, and society collapsed in the vacuum. Now, for the first time in centuries, those left behind take their first baby steps from the culling of previous generations. There’s finally hope, finally something to fight for. Crops are starting to grow and populations are booming. In this burgeoning wasteland, various factions vie for power and resources. There are vast troves of wealth out in The Wilds for those willing to take the risks to obtain them.

Wreck Age is a 28mm tabletop skirmish miniatures game, set on post-collapse earth, where you control a small crew of characters, looking to establish themselves in the vast wastelands  of the Merikan continent.

• Everything you need to get started (except dice and miniatures) - with rules for campaign play, and a variety of encounters that you can jump right into.

• Quick character generation - using Archetypes and a simple system called Resource Units to both create and advance your Characters, you can get your group scavenging The Wilds in a matter of minutes.

• History and background information - explore the Merikan Wilds to their fullest. From the Washed Coast to the Glades, from the skeletal towers of Man Hadden to the colorful and chaotic sprawl of Esperanza, the fledgling towns and crumbling cities make up the character of the world.

• Campaign rules - allowing you to develop your crew into hard-shelled heroes (or villains) of The Wilds.

• Community Creation and Structures - build your own community, quite literally. Playable Structures interact with characters on the tabletop, allowing you to expand your campaigns in directions never before seen in a tabletop miniature game.

• 8 playable factions - and if you decide to go faction-less, and set off on your own, you can do that too!