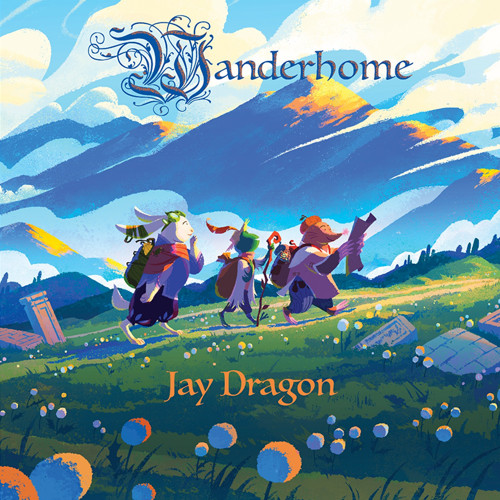 Wanderhome is a pastoral fantasy role-playing game about traveling animal-folk, the world they inhabit, and the way the seasons change. It is a game filled with grassy fields, mossy shrines, herds of chubby bumblebees, opossums in sundresses, salamanders with suspenders, starry night skies, and the most beautiful sunsets you can imagine.

You might be a tamarin who dances with small and forgotten gods, a leporine mail carrier who relies on moths to get packages where they belong, a little lizard with a big heart and a mysterious past, or a near-endless number of other thrilling possibilities. No matter what, we’re always travelers—animal-folk who go from village to village and get to see the length and breadth of all the world of Hæth. The seasons will change as we play, and we will change with them.

Wanderhome makes use of a unique game system inspired by the No Dice, No Masters engine, developed by Avery Alder and Benjamin Rosenbaum for Dream Askew and Dream Apart. Each player will make a character with the help of one of fifteen possible playbooks, making choices about their personality, animal-form, look, and passions. Each of these playbooks give you a radically different approach both to navigating the setting and growing over time. From the carefree Ragamuffin to the introverted Poet, from the Guardian and their young ward to the lonely Exile, from the cheerful Dancer to the moody Veteran, there is plenty of space in Wanderhome to imagine every possible world that lives in your heart.

Once you’ve created your character, you and your fellow travelers guide them through the dreamlike pastoral world of Hæth. There are no dice in Wanderhome. Instead, you can inconvenience yourself or step outside your comfort zone in order to get tokens, and then turn around and spend those tokens to tackle larger problems and help make the world a better, kinder space.

Wanderhome is structured with an emphasis on safety and care, built on my own work designing safety mechanics and constructing alternate safety approaches beyond the industry standards. It features a bespoke set of safety mechanics built around empowering players to guide the story however they want, which are used consistently throughout the game. It is also designed to collaboratively set the tone and articulate a version of Hæth that's perfect for your group.

Wanderhome is a GM-agnostic game–while you can play with a Guide facilitating the world, you can also approach it without anyone in charge, where everyone takes equal part in the collaborative conversation. And while you can play Wanderhome in as little as 3-4 hours, the longer you stay with Wanderhome the more the world will grow with you. The months will pass over time and as each season concludes you’ll get to make new choices about your character, advancing them in new directions and helping them grow in ways you didn’t think was possible. If you play long enough, eventually your characters will retire or grow apart, and the journey will continue with brand-new travelers and a vast world ahead of you.

Wanderhome is set in the wholly original fantasy world of Hæth, inspired by the works of Brian Jacques, Tove Jansson, and Hayao Miyazaki. The game hints at and builds a mythological language around forces like the bitter King of the Floating Mountain, the Lily Rebellion, the Slobbering God and the blade that killed her, and the fall of the great dragons of old, but refuses to elaborate or define them—leaving that exercise to the players through the journey itself. Instead, Wanderhome is focused on the lives of ordinary people, and the world that exists for farmers, merchants, and crafts-folk.

Wanderhome is a world filled with animal-folk and their buggy livestock. Unlike many worlds with animal-folk, there is no morality or judgement ascribed to the various animals of Hæth—a snake is just as capable of being a kindly farmer as a rabbit, and you can’t assume much about someone based on what animal they are. You might find a fluffy shepherd with a herd of bumblebees, a shrewish merchant riding a stag beetle the size of a house, a lonely fox riding a grasshopper from place to place, or a praying mantis that hangs out in a gecko’s pocket.

That Time You Killed Me

Ouch (On Order) (Sold Out - Restock Notification Only)