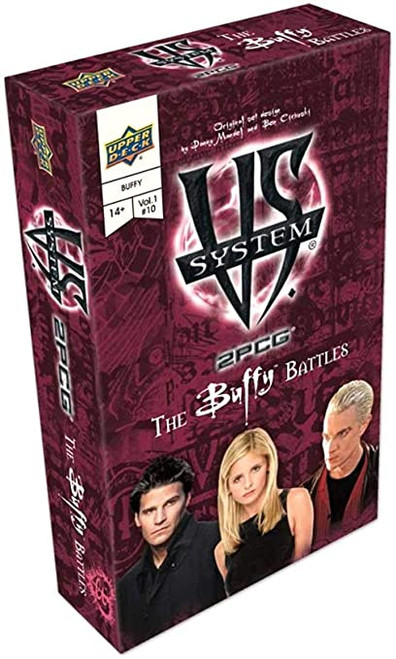 The Buffy Battles will feature 200 cards with images taken from the show, split between "The Good Scoobies" and the "Evil Forces of Darkness," the two teams in the game.

The Good Scoobies are naturally led by the Slayer herself, Buffy, whose "Slayer" ability allows her to kill Evil supporting characters regardless of how much health or vitality they have. Her team includes characters like Giles, Xander, Cordella, and Willow.

The Evil Forces of Darkness, on the other hand, is composed mostly of vampires like Drusilla and The Master, who can gain vitality by wounding opposing characters. Other villains, including the demonic Mayor Wilkins and the voice-stealing Gentlemen also put in an appearance.

The set also includes some characters that can join either side, or even change sides during the game, including Buffy’s love interest Angel, who can become the evil Angelus, and the evil Slayer Faith.

VS System: 2PCG:MCU: Heroes (Sold Out)

VS System: 2PCG:MCU: Villains (Sold Out)

VS System: 2PCG:MCU: Heroes (Sold Out)

Tsuro of The Seas