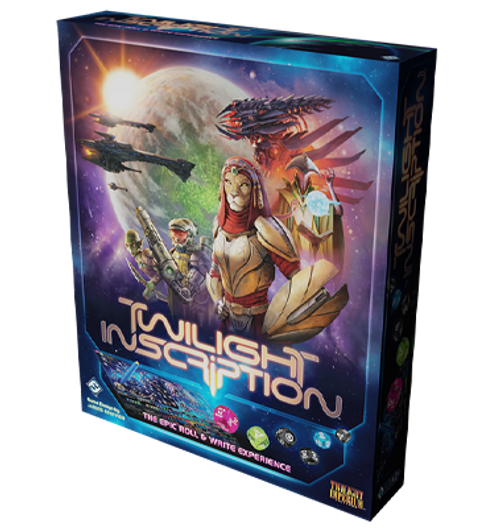 A Roll-and-Write Game in the Twilight Imperium Universe!

This epic roll-and-write game for one to eight players offers an experience unlike anything FFG has done before. With a limited pool of resources at your disposal, you’ll need to carefully manage Navigation, Expansion, Industry, and Warfare as you amass victory points and earn your right to the throne on Mecatol Rex. Will your faction become the new rulers of the galaxy? Or will your fledgling empire fade into obscurity? Anything can happen in this strategic, infinitely-replayable game!

Between all the factions you can play as and the different player sheets you can use, no two games of Twilight Inscription will feel quite the same. Now, let’s take a look at the things you’ll be doing during a game.

Each round kicks off with an event card. These grant you resources, which, along with the resources rolled on the dice, you then spend on one of your player sheets in a multitude of ways. You do this by using your marker to cross off the resource costs for whatever it is you’re trying to do (hence the “write” part of roll-and-write). Just keep in mind that you can only spend resources on one sheet per round!

There are a lot of things to spend resources on across all four sheets, and figuring out the best place to do so is part of the core strategy in Twilight Inscription. Maybe you want to discover new systems or race to Mecatol Rex on Navigation; perhaps you’d rather develop some planets on Expansion; you could always generate commodities to amass your wealth on Industry; or maybe you just want to build up your fleet on Warfare. You’ll gradually gain victory points no matter which sheet you invest in, but take care not to neglect any of them; otherwise, unexpected events could throw you off your game!

All in all, striking the balance between Navigation, Expansion, Industry, and Warfare is the key to achieving victory. There are endless possible strategies that you could use to pull ahead of your opponents—the question is, which approach is the best for you? The game goes until the war event "A Throne for the Taking" is resolved, at which point everybody’s victory points are tallied. Whoever has the most is the winner!