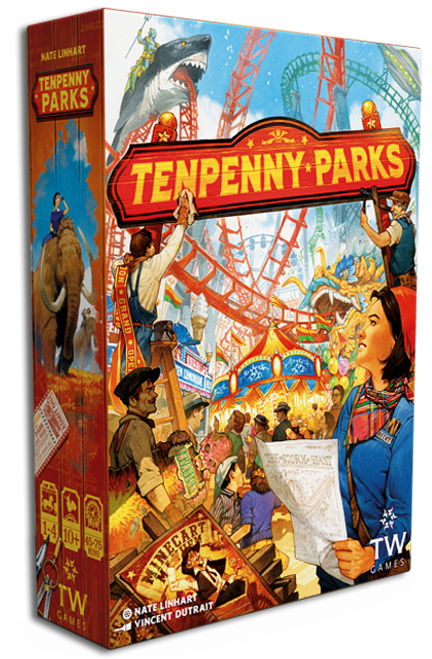 At dawn, the trumpets sound, Mayor Tenpenny’s shovel breaks ground, and the race is on! You have five months to transform the humble town of Fairview into the home of the world’s greatest theme parks.

​A game of Tenpenny Parks is played over five rounds, called months. Each month, players take turns placing workers on the game board to take actions like removing trees, building concessions and attractions, and buying more property to make their growing theme parks as attractive to Visiting People (VP tokens) as possible.

Income
Each player takes $3 from the supply plus any income shown on any of their concession tiles or attraction cards.

Actions
Starting with the player who has the shovel token and proceeding clockwise, each player places one worker on an action space and takes the associated action. Actions spaces include:

Bonuses
Emotion tracks of Thrill, Awe and Joy are evaluated for awards, including an extra action worker, the first player (shovel) token, $3, and/or a bonus VP token.

Advertising
Players may spend money to advertise any or all of their attractions for VP tokens.