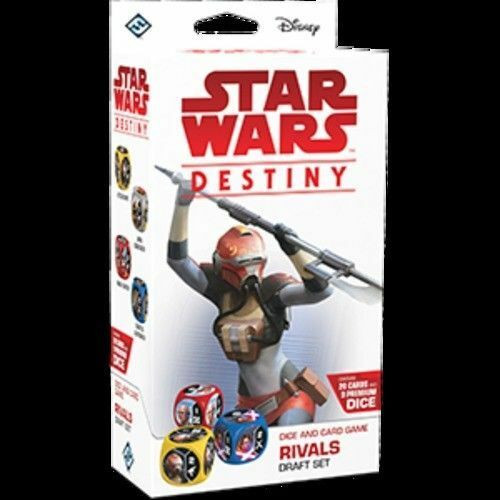 Star Wars: Destiny Rivals introduces a new way to play Destiny in the form of draft and sealed events. Playing in a draft requires each player to have one Rivals Draft Set and six booster packs of any set.

A Star Wars: Destiny Draft event will feature every player opening three booster packs, selecting one card to take from the pack and passing the remaining cards to their left for that player to select a card and pass. Once these cards have all been selected, the next three packs are opened and players pass right. When all is said-and-done, players will have thirty cards from the booster packs as well as the twenty cards featured in their Rivals Draft Set to construct a twenty-to-thirty card deck. A player can add as many copies of a card to a deck as they want, and hero, villain, and neutral cards can all be intermixed in the same deck in the draft format.

The Rivals Draft Set includes twenty cards that are meant to supplement the cards you draft from Booster Packs. With characters, supports, upgrades, and events of every color, the Rivals Draft set gives you all the tools you need to construct a successful deck. Every card featured in Rivals is legal for constructed play in Destiny, and makes for a great way to expand your collection.