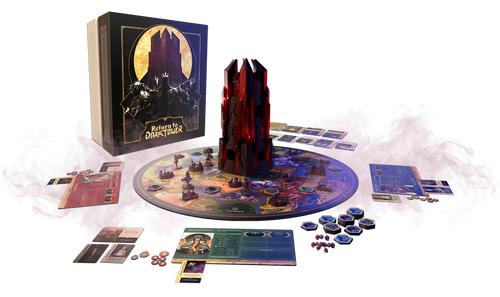 Return to Dark Tower is a game for 1 to 4 heroes who undertake epic quests, fight fearsome foes, and test their mettle against the looming darkness of the titular tower. Now featuring both cooperative and competitive play. Designed by Rob Daviau and Isaac Childres -- designers of the two highest rated games of all time on Board Game Geek -- along with Noah Cohen, Brian Neff, and Justin D. Jacobson, the streamlined rules offer players difficult choices about when to advance their objective, gather resources, deal with threats, or level up.

Each player controls a unique hero with their own starting inventory and special abilities. Along the way you gain helpful items, powerful virtues, and trusty companions to help you achieve your goal: Find a way into the Tower and defeat a powerful adversary.

Figuring out the best way to utilize all of these assets is the key to victory. The game actively works to stop you, responding to your decisions and taking advantage of your missteps. Foes, each with their own strengths and weaknesses, will stalk your hero and assault your buildings.

Looming over the board, the Tower itself is the greatest menace you'll face. Each turn, you drop a skull in, representing the threat of corruption. You decide where emerging skulls are placed, making those buildings less useful. At times the Tower itself springs to life, releasing trapped skulls in a single wave or revealing glyphs that sap your will.

The path to victory is fraught with peril. Battles and events can give your hero corruption. If you don't cleanse skulls from the buildings to keep them in check, the supply quickly dwindles.

Imploding Kittens (In-Store Pickup Only) (Sold Out - Restock Notification Only)

Tower of Madness (Sold Out - Restock Notification Only)

Out of Order (Sold Out - Restock Notification Only)

Prerelease Events—Bayshore, Phyrexia: All Will Be One—Magic: the Gathering (In-Store Event Only) (Sold Out)