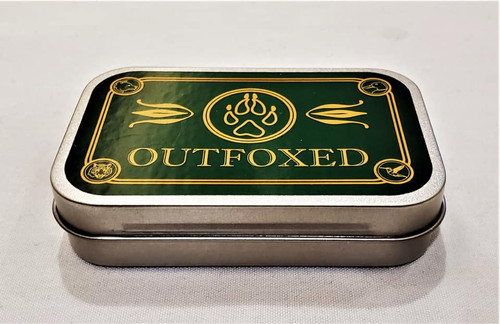 OUTFOXED is the guessing game of trying to catch the Fox. Players take turns being the Hunter, while the other players take an animal token.

The Hunter then asks each player one yes or no question about their animal. The Hunter needs to watch out! The Fox doesn’t have to tell the truth!

After they have asked their last question, the Hunter must take a guess at which animal each player is holding and then scores points depending on how well they did.

Mint Tin Game—Literally the size and design of a mint tin, take it anywhere you could take a pack of mints!

Make it a Drinking Game—Outfoxed was designed to with the concept of drinking game in mind. The rules lend themselves to assigning drinks and having some libations with your fellow players to cloud your deduction reasoning as you play. (Assuming you're of legal drinking age, of course!)

Someone Has Died (Sold Out - Restock Notification Only)

Unstable Unicorns: NSFW Base Game (On Order) (Sold Out - Restock Notification Only)

We're Doomed! (On Order) (Sold Out - Restock Notification Only)