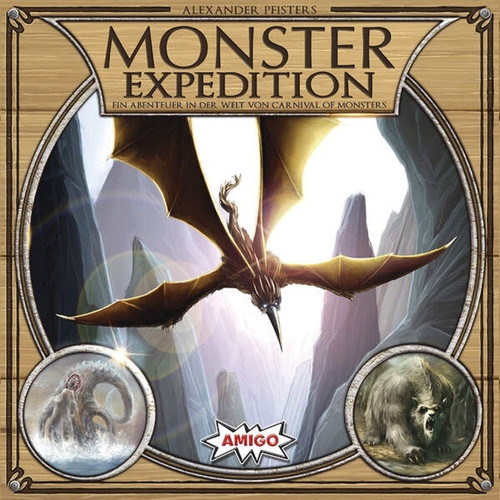 In this game set in the world of Carnival of Monsters, players take on the roles on of members of the Monstrological Society and are off to hunt monsters in three exotic ecosystems. Players pitch three supply camps, blue, yellow, and green, and place a community "wilderness" camp with 10 monster cards and a draw deck in the middle of the table. On their turn, players pick a camp and roll the dice shown on it. They bank all of the dice that have a single value on it.

They then use the remaining dice to hunt monsters of the camp's color. The more monsters they catch, the more victory points they rack up and the better their monster-hunting abilities become. The game ends when the draw deck is used up and each player has taken the same number of turns. Then, players tally up their victory points from the monsters they've caught.