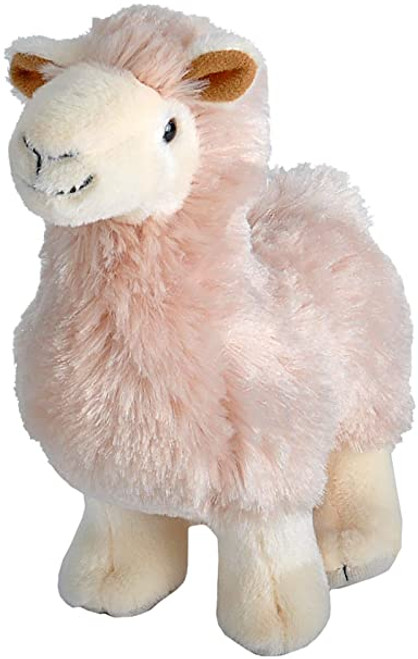 One look at the soft and snuggly fur covering the distinctive long neck of your llama stuffed animal will have you wanting to throw your arms around it and never let go. With a wooly coat to keep it warm, the llama spends its days in the Andes transporting heavy loads across the mountains. Llamas are known for their durable yet soft, lightweight wool, and this plush toy is the same! The fluffy fur of this Peruvian pack animal is sturdy and Surface-washable, able to stand up to hours of plush toy playtime, but lightweight enough that Your llama plushier will never weigh you down on adventures. This realistic stuffed animal never has anything but a smile on its fuzzy white face, with perky brown ears poking out of its textured off-white fur. Llamas are often confused for their smaller cousins, alpacas, but if you can't tell them apart, look at the ears! Llamas have longer ears that curve slightly inward. While llamas are social creatures, This Llama stuffed animal has an independent streak, able to stand on its own 4 fuzzy hooves. But don't let that fool you, this Llama would be more than happy to go home with you And join your herd! Llamas are typically gentle, curious animals, but just like your little brother or sister, when the llama isn't pleased with you, they'll stick Out their tongue and Spit. Don't worry though, the only spitting that will happen around this lovable llama plush toy is when someone says “that stuffed animal is so cute I could Spit!” adults, kids, and teens alike will love this little llama plush toy. Wild Republic has been developing animal plush and educational toys for kids of all ages since 1979, With a unique specialization in realistic stuffed animals.