Lighthouse at the End of the World 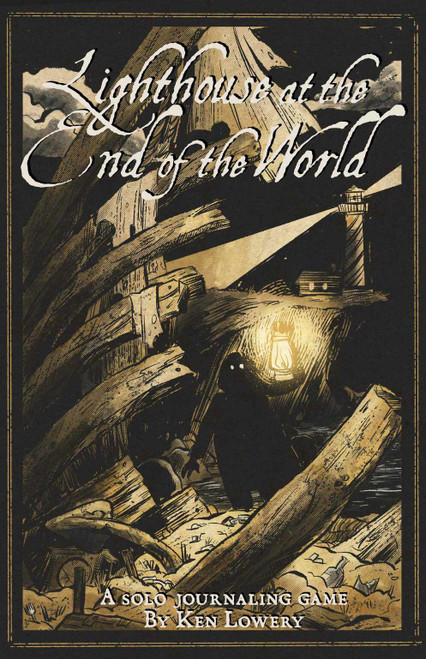 Lighthouse at the End of the World

Tend the light.
Fend off the dead.
In all things, persist.

You play a lighthouse keeper at the furthest reaches of civilization. Your tormentors are numerous: the crushing solitude, the chaotic weather, the penal colony nearby, and a legion of unquiet dead conspire to erode your sanity until one of them claims you.

You may well die. But you will not go quietly.

With a die, a tower, a deck of cards and a handful of coins, you will reveal why you came to be here, document the uncanny perils and numbing drudgery of life in the lighthouse, and explore the unraveling mystery of your ghostly companions. For discovering their true identities may be the one way to end their suffering… and consequently your own.

Live or die, by the end of Lighthouse at the End of the World you will have penned a strange tale of doom, perseverance and grace in the face of certain oblivion.

Lighthouse at the End of the World is a 32-page sourcebook written by Ken Lowery with cover art by Sally Cantirino.

This work is based on The Wretched (found at http://loottheroom.itch.io/wretched), product of Chris Bissette and Loot The Room, and licensed for our use under the Creative Commons Attribution 3.0 Unported license.

It's a Wonderful Kingdom