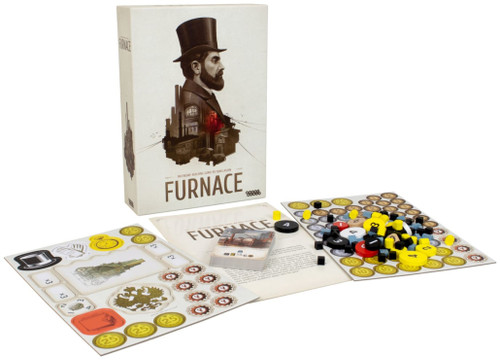 Furnace is an elegant engine-building euro game where the players take on the roles of 19th-century capitalists building their industrial corporations and aspiring to make as much money as they can by purchasing companies, extracting resources, and processing them in the best combinations possible.

GAMEPLAY
The game is played over 4 rounds. Each round consists of 2 phases: Auction and Production.

AUCTION PHASE
Each player has 4 discs with values 1–4 to bid on the cards in the common row. The players take turns placing 1 of their discs on the cards until they don’t have any discs left.

Then, the cards are resolved one by one in order from left to right. The highest bid receives the card. All other bids get compensated: the value of the disc multiplies the compensation.

PRODUCTION PHASE
Now, the players manage their own cards in any order they wish. They may gain resources, process them into other resources or money, and upgrade their cards for additional effects.

GAME END
When the 4th round is over, the player with the most money tokens wins.

D&D and RPGs—Sunday—Mayfair (In-Store Event Only)

Mountains of Madness (On Order) (Sold Out - Restock Notification Only)