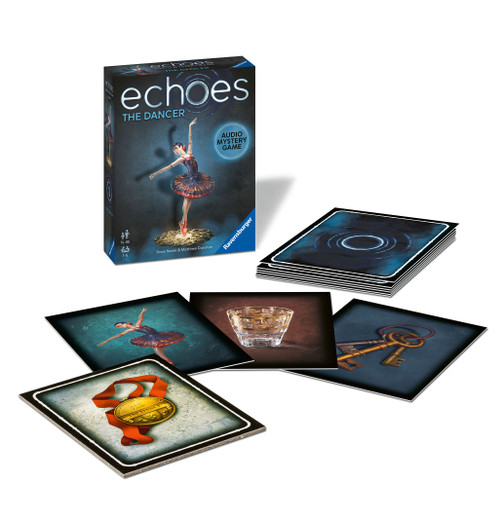 Listen to echoes from the past to solve a mystery.

In THE DANCER, the ghost of a young girl haunts a Scottish country manor. Listen to the fragments of her story and solve the riddle of her death.

Echoes Games
In Echoes, a new audio mystery series from Ravensburger, players solve a mystery by triggering spine-tingling clues using an app and a deck of beautifully illustrated cards.
What's was that noise?

When playing echoes you slip into the role of an investigator with a very special and unique ability.
You can hear mysterious noises and voices clinging to objects - so-called - echoes of the past.
Using your unique ability you try to elicit the mysterious story from the objects, and try to put the events in the correct order.

Can you solve the mystery and find out what happened?

The game requires at least one player to download the free app.

Echoes of the Past, Mythos Pack—Arkham Horror: The Card Game (Sold Out - Restock Notification Only)

D&D and RPGs—Sunday—Mayfair (In-Store Event Only)

D&D and RPGs—Saturday—Mayfair (In-Store Event Only)

Escape from the Starline Express