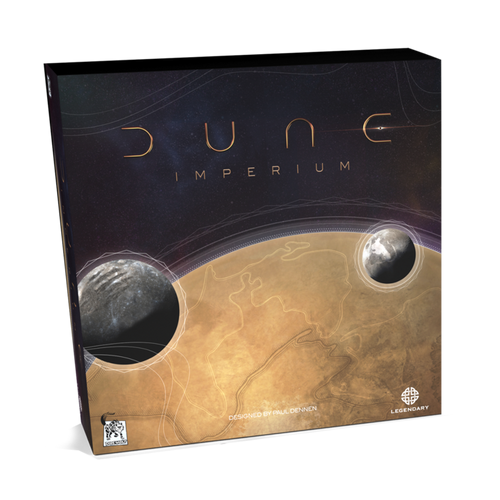 Dune: Imperium blends deck-building and worker placement in a deeply thematic new strategy game where the fate of the Empire hangs on your decisions.

Will you seek political allies or rely upon military might? Economic strength or subtle intrigues?

A council seat... or a sharpened blade? The cards are dealt. The choice is yours. The Imperium awaits.

As a leader of one of the Great Houses of the Landsraad, raise your banner and marshal your forces and spies. War is coming, and at the center of the conflict is Arrakis – Dune, the desert planet.

You start with a unique leader card, as well as deck identical to those of your opponents. As you acquire cards and build your deck, your choices will define your strengths and weaknesses. Cards allow you to send your Agents to certain spaces on the game board, so how your deck evolves affects your strategy. You might become more powerful militarily, able to deploy more troops than your opponents. Or you might acquire cards that give you an edge with the four political factions represented in the game: the Emperor, the Spacing Guild, the Bene Gesserit, and the Fremen.

Speak Out (Sold Out)

Mountains out of Molehills (Sold Out)

Dune: The Board Game (Sold Out)

Dune: The Board Game (Sold Out)