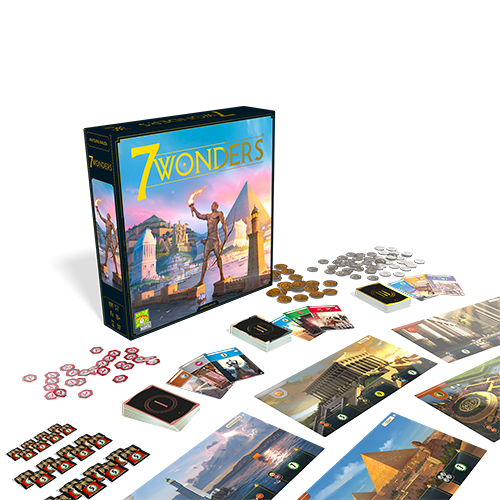 Make the right decisions to lead your civilization to prosperity!

Lead one of the seven greatest cities of Antiquity. Develop your civilization on a military, scientific, cultural, and economic level. Once built, will your Wonder bring you glory for millennia to come? No downtime, renewed fun in each game and perfect balance regardless of the number of players.

New Edition Updates
This new edition, releasing 10 years after the game's initial release in 2010, will come in a larger box with new box artwork and logo. The wonder boards are now larger and instead of having an (A) and (B) side with the same artwork, they now have a day side and a night side. Additionally, the iconography for the cost of each card has been relocated to improve clarity, and the iconography for chaining (building without paying the production cost) cards has been revised to improve understanding.

Finally, the rules have been rewritten to make learning the game easier, but the award-winning gameplay designed by Antoine Bauza remains the same.