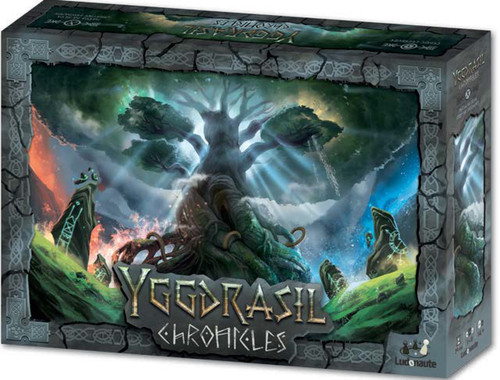 In Yggdrasil Chronicles, each player takes the role of a Norse god and attempts to keep evil forces from devastating the nine worlds, destroying the world tree Yggdrasil, and surviving the onset of Ragnarök. For performing world actions, you can collect elves, heroes, artifact cards; remove Hel's anonymous minions or Surt's fire giants; or receive help from worldly creatures. If another god stands in this world, your action is improved; if an enemy stands in that world, then your action is penalized. In addition to that base game, you can play Yggdrasil Chronicles on the hard mode, which increases the challenge of gameplay while giving each god unique powers. The game also includes a six-saga "Ragnarök campaign" that begins with Baldr's murder, then carries on from there.

The Goonies Coded Chronicles (Sold Out)

Descent: Journeys in the Dark 2E (Sold Out)