Someone Has Died (Sold Out) 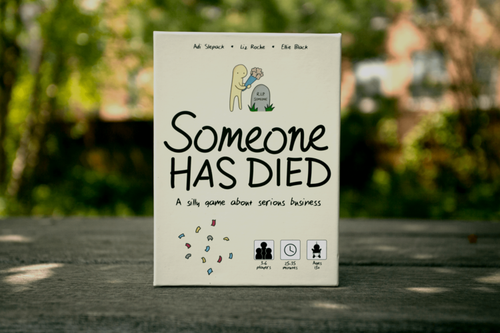 Someone Has Died (Sold Out)

Someone Has Died is an improvisational storytelling game set at a will arbitration where players try to convince an estate keeper that they are the most worthy of someone's fortune. Identity, relationship, and backstory cards help players create wacky characters who must argue against one another for the riches and glory.

The game was originally created by Adi Slepack and Ellie Black, who were grouped by fate as "Team Laserz" in a game design class at Wesleyan University. They were tasked with creating a social game and, after lots of nothing, the team fixated on the concept of Werewolf, where people are constantly being killed every round. They decided instead to start with the dead person. Soon after, the idea of a will arbitration sprouted and Someone Has Died was born.

Speak Out (Sold Out)