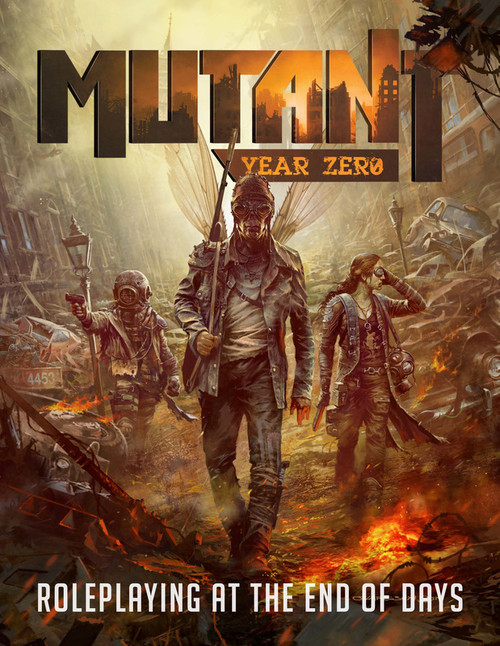 Of course the world ends. It was always just a question of time. When it’s all over, Earth is still. Nature invades the ruined cities. Winds sweep through empty streets, turned into graveyards.

Yet life remains. In the Ark, a small settlement on the edge of a dead town, the People live. You are the spawn of humanity, but not human anymore. You are twisted funhouse images, mutated freaks. Your bodies and minds have incredible powers, but you are unstable. Fragile. None of the People are over 30 years old.


This is Year Zero.

Mutant: Year Zero goes back to the origins of the Mutant franchise: role-playing after the Apocalypse. In this game, you play as one of The People - heavily mutated humans living in The Ark, a small and isolated settlement in a sea of chaos. The outside world is unknown to you, and so is your origin.
Mutant: Year Zero has two major game environments, each with its own style of play:

The Ark, your home in the dawnworld. A nest of intrigue and Lord of the Flies-style power struggles, it’s far from a safe haven. But it’s the only home you know, and just maybe the cradle of a new civilization. The game rules let you improve and develop the Ark in the areas of Warfare, Food Supply, Technology, and Culture. It is up to you, the players, to decide which projects to embark on.

The Zone, wastelands outside the Ark. You will venture into the Zone in search of food, artifacts, other mutants, and knowledge - not least about The People’s own origin. The game includes two maps of example Zones; London and New York and a plethora of tables and other tools to let the GM populate its sectors with mutants, deadly monsters and bizarre phenomena.

Where in the world the Zone and the Ark are located is up to you - why not play in a post-apocalyptic version of your own home town? The modular approach of this game lets you place all of the campaign material wherever you like.
×